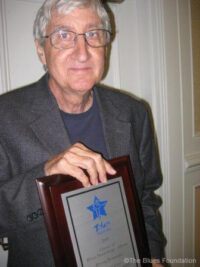 Bruce Bromberg has been one of the premier producers of blues and roots music of the past 40 years, known especially for his work with Robert Cray. Although he was born in the blues capital of Chicago on Oct. 31, 1941, and raised there and in suburban Park Forest, country music was one of his earliest interests. His appreciation of the storytelling structure of country songs influenced his own work as a producer and songwriter in blues and other genres.

After the Bromberg family moved to Los Angeles in 1958, he worked for various record labels at different jobs – warehousing for Dot Records, recording Lightnin’ Hopkins for the Vault label, co-producing a Kent blues reissue series with Frank Scott, and operating his own Joliet label. His productions by Driftin’ Slim, Phillip Walker, Lonesome Sundown, Tony Mathews, Ted Hawkins, Cray, and others appeared on a variety of imprints, including Rounder, Alligator, Playboy, and Tomato, until, in a quandary about choosing a label for a 1983 Cray session that he felt held great potential, he made the perspicacious move of launching HighTone Records in partnership with Larry Sloven. That Cray album, Bad Influence, set Cray’s star on the rise and established Bromberg and Dennis Walker as the label’s producing-songwriting team. The pair also produced Cray’s breakthrough albums on Mercury. Bromberg had an ear for blues artists who could advance the idiom at HighTone, like Cray, Joe Louis Walker, James Armstrong, and Chris Thomas King, as well as for roots, rockabilly, country, and folk standouts including Joe Ely, Billy Lee Riley, Jimmie Dale Gilmore, Tom Waits, and Dave Alvin. After an impressive quarter-century, Bromberg and Sloven sold HighTone in 2008 to Shout! Factory.

Bruce Bromberg passed away on December 26, 2021, after a long illness.