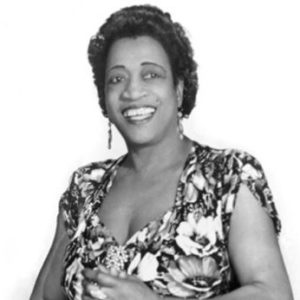 Ida Cox was touted as the “Uncrowned Queen of the Blues” right from the start of her recording career with the Paramount label in 1923, and before long the crown was bestowed in her ads and press notices. Although historians have often rated Ma Rainey and Bessie Smith as the top blues stars of the classic vaudeville blues era, the popular and prolific Ida Cox was every bit their rival, and the influence of her songs has rarely been given its due. Her records were filled with titles and verses that resurfaced in the work of legendary bluesmen – for example, “How Long, Daddy, How Long” (Leroy Carr), “Death Letter Blues” (Son House), “Mojo Hand” (Lightnin’ Hopkins) and “I Am So Glad” (Skip James).

Billed as a high-class entertainer, Cox was a solid, savvy professional who sang the blues with clarity, conviction, and poise and dressed in the finest gowns. A composer of note, she dealt with a range of subject matter, often returning to favorite themes such as death, graveyards, wayward lovers, heartbreak, betrayal and asserting her rights. Her “Wild Women Don’t Have the Blues” has become a feminist anthem, but by all reports, the salacious lifestyle of the song didn’t actually mirror her own life. In a 1932 interview in the Kansas City, Kansas Plaindealer she claimed she preferred classical music but sang blues by public demand.

She told the reporter that she was born in Knoxville, Tennessee, on January 25, 1894, and left home to perform after finishing high school there. However, by official records, she was born Ida M. Prather in Cedartown, Georgia, on February 25, 1888, 1894 or 1896 depending on which source is cited (census, Social Security or death certificate). Toccoa, Georgia, has also been cited as her birthplace. As a teenager, she went on the road to perform as a comedienne and singer with minstrel shows and married a Bahamian-American cornetist, Attler Cox. News reports of her singing at theaters and appearing with her husband in the Rabbit Foot Minstrels show in Georgia appeared as early as 1913. By 1915 Attler had found a new wife, Ethel, to sing with the Florida Blossoms minstrels, while Ida continued her theatrical work in Georgia. In the city she cited as her favorite, Chicago, she was spotted by J. Mayo Williams of Paramount and recorded for the label for six years, accompanied on many records by one of the first women to play piano on blues sessions, Lovie Austin. Jesse Crump also played piano, wrote songs, and toured with her, and the two were married in 1927.

Cox, based in Chicago, organized and headlined the Raisin’ Cane revue for several years, then took top billing in another touring theatrical show, Darktown Scandals, persevering through the Depression when most of her competitors had faded away or changed career paths. For two seasons in 1941-42, she even tried reviving an old tent show called Mandy Green From New Orleans. Under the auspices of John Hammond, she appeared at the historic 1939 Spirituals to Swing concert in Carnegie Hall and recorded for Columbia’s Vocalion and OKeh subsidiaries in 1939 and 1940 with lineups of all-star sidemen including guitarist Charlie Christian on several sides. During World War II she entertained at U.S. Army camps with her Darktown Scandals but during a nightclub performance in Buffalo on April 12, 1945, she suffered a stroke and went into retirement. She lived with her daughter in Knoxville afterward.

After her old records began to be reissued on albums in the 1950s, Cox was coaxed into recording again and cut an LP for Riverside backed by the Coleman Hawkins Quintet in 1961. That, however, was the extent of her participation in the blues revival, and otherwise, she said she only sang in church. In interviews, she said the highlights of her career were appearing with Jelly Roll Morton at the 81 Theater in Atlanta, with King Oliver at the Grand Theater in Chicago, with the Count Basie band in Carnegie Hall, and on the Queen Mary ocean liner in Nova Scotia. On November 10, 1967, Ida Cox died in Knoxville.