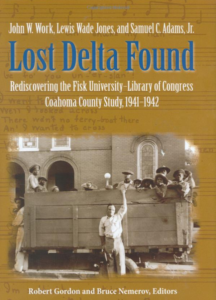 Alan Lomax’s Land Where the Blues Began, a previous selection in the Classics of Blues Literature category, colorfully recounts the renowned folklorist’s memories of his experiences in Mississippi, most notably his 1941-1942 field recording expeditions that resulted in the first recordings of Muddy Waters. In Lost Delta Found, a 2005 Vanderbilt University Press publication, editors Robert Gordon and Bruce Nemerov present another valuable perspective on that Coahoma County study that was planned for publication back in the ‘40s, an account written by African-American scholars from Fisk University that documents their crucial but often overlooked work on the project. The original manuscript written by John W. Work and by Lewis Wade Jones was submitted to the Library of Congress but was reported missing or misplaced for years. The Fisk crew included Samuel Adams, whose 1947 master’s thesis on the subject has been added to the book, and others who documented the black music of the county on multiple trips (several without Lomax) through interviews, surveys, and their own observations about the music and its social context in the community. Some of this work appeared in the Lomax book, but here it is presented in more objective, less romanticized fashion, including analyses, musical transcriptions, photos, and an index by Work. The entrée the Fisk participants provided Lomax into the African-American community was critical to the success of the study, and so was the scholarship they contributed. Lost Delta Found restores their place in history.