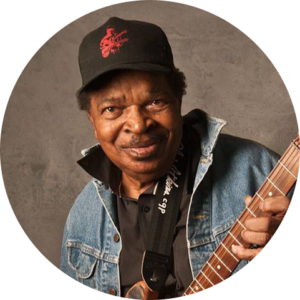 Matt “Guitar” Murphy only garnered widespread public attention through the 1980 Blues Brothers movie, in which he acted in a scene with Aretha Franklin and played with Jake and Elwood’s band, but his laurels in the blues world had long been secured by then. His sizzling guitar licks energized Memphis Slim’s records in the 1950s and pushed the James Cotton Band to the peak of high-energy blues in the ’70s, and along the way he contributed to sessions by Bobby Bland, Sonny Boy Williamson, Otis Rush, Chuck Berry, and many others. Murphy was born on Dec. 28, 1929, in Sunflower, Mississippi, and first made a name for himself around Memphis and West Memphis playing in the bands of Howlin’ Wolf and Tuff Green and with the Blue Flames, a young group that included Junior Parker and Ike Turner. News of the hotshot guitarist reached Memphis Slim, who recruited Murphy in 1952 to play with him for almost a decade. When Slim moved to Europe he tried to persuade Murphy to join him there, but Murphy stayed in Chicago, doing session work and playing with blues and jazz bands, along with occasional touring, including the 1963 American Folk Blues Festival in Europe. A long stint with James Cotton put him out on the touring circuit again, but only after the notoriety of the Blues Brothers did Murphy, a lifelong sideman, begin touring with a band of his own. Even then he hired a lead vocalist although he proved he could sing, too, when he gave himself the chance. Murphy recorded his first album for Antone’s in Austin, Texas, in 1990, joined by his brother Floyd, also an acclaimed guitarist. After years of playing the blues bar circuit, Murphy suffered a stroke in 2003 but returned to performing in 2009. In the words of the late blues legend Willie Dixon, who hired Murphy to play on sessions and tours whenever he could, “He is definitely the best guitar player — the best one I heard anywhere.” Or, as Memphis Slim put it, Murphy is just “a damn genius.”