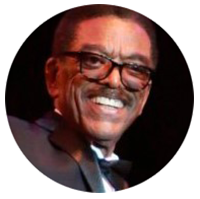 Syl Johnson parlayed a background steeped in blues and a streetwise sensibility for soul and funk into a hitmaking career that turned even more profitable when hip-hop artists began sampling his vintage records. Johnson, who joins his older brother Jimmy in the Blues Hall of Fame, was born into a blues family in rural Benton County, Mississippi, on July 1, 1936. Their surname was Thompson, but when Syl recorded under the name Johnson in Chicago in 1959, Jimmy followed suit. Their brothers Mack and Grundy and their father Sam Thompson also played.

After moving to Chicago, Syl befriended a young Magic Sam and brother Mack became Sam’s regular bass player. Johnson’s guitar playing came to the attention of fellow 2020 Blues Hall of Fame inductee Eddie Boyd, who hired Syl to play in his band. Johnson also teamed with Billy Boy Arnold and played on recording sessions with him in 1956 and 1957. The Blues Discography also lists him on sessions with Elmore James, Junior Wells and Harmonica George Robinson, and Johnson recalls playing in a five-guitar lineup with Jimmy Reed in the studio. Johnson secured his own contract with Federal Records in 1959 and waxed several blues and R&B singles for Federal and other labels, finally hitting pay dirt in 1967 with a funky play on a popular catchphrase, “Come On Sock It to Me” on the Twilight label. In keeping with the times, “Different Strokes” and “Dresses Too Short” also hit the R&B charts. In a more serious, socially conscious mode, the classic “Is It Because I’m Black” and “Concrete Reservation” joined his Billboard hit list, which came to encompass 19 singles on Twilight, Twinight, Hi, Boardwalk and his own Shama imprint. The biggest hit was “Take Me to the River,” produced by Hi Records’ Willie Mitchell in Memphis.

One of the top stars on Chicago’s soul scene during the 1960s and ‘70s, Johnson embraced his blues roots in the ‘80s beginning with the LP Brings Out the Blues in Me—inspired, he says, by the request of Japanese fans. His last hit, “Ms. Fine Brown Frame,” was recorded with James Cotton’s Blues Band, and Buddy Guy’s brother Phil accompanied him on sessions in Chicago and in France, where Johnson cut the LP Suicide Blues. Mixing his soul, blues, and funk, he recorded for blues-oriented labels Delmark and Antone’s and began playing more guitar and harmonica at blues clubs and festivals while also launching a chain of seafood restaurants which soon took up most of his time but eventually failed. He and Jimmy—whose musical path had likewise taken him from blues to soul and back—recorded together on the 2001 CD Two Johnsons Are Better Than One.

Meanwhile, many hip-hop stars had been picking up on Johnson’s 1960s work, especially “Different Strokes,” which has been sampled several dozen times. The resulting income—some of it by litigation—allowed Johnson a comfortable lifestyle he never earned through his own record sales and performance fees. A new wave of enthusiasm for Johnson greeted the release of a 2010 box set of his early recordings from the Numero Group, and the Johnson legacy has continued as his daughter Syleena has recorded hits of her own.