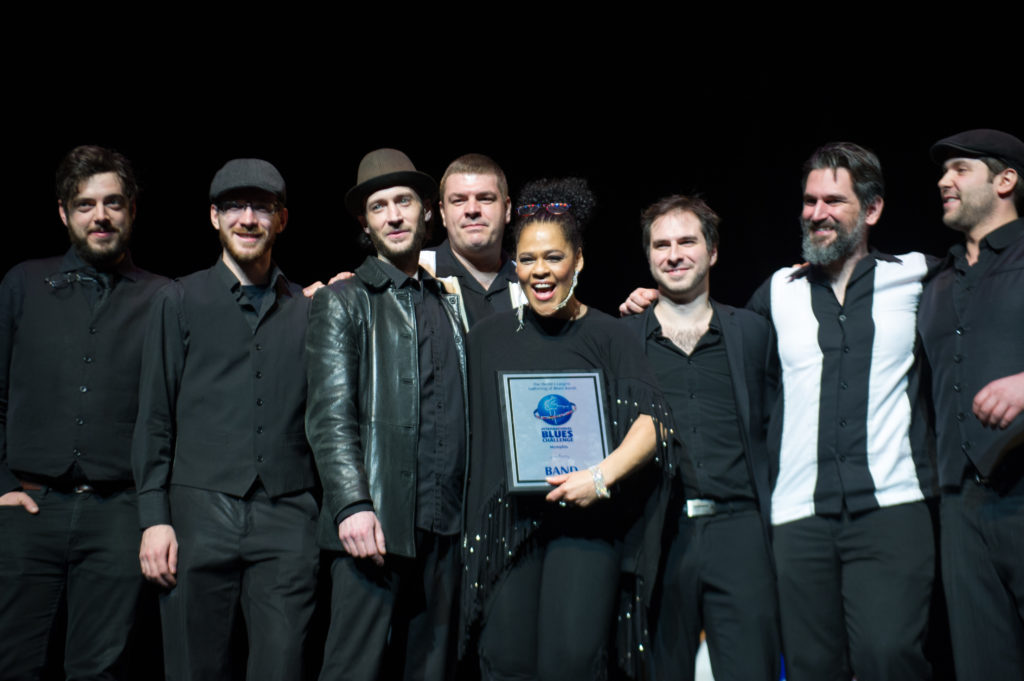 Four years ago singer Dawn Tyler Watson reached the top five at the Blues Foundation’s 2017 International Blues Challenge. This year, she left Memphis a winner after grabbing Best Band honors. Not only did Watson wow the judges with her powerhouse vocals, but she did so only months after having triple bypass surgery. Her victory at the IBC, the world’s largest and most prestigious blues music competition, should serve as a launching pad for the Montreal Blues Society-nominated songstress who has been has been hailed as “one of Canada’s true blues treasures.”

For Al Hill, winning Best Solo/Duo Award represents long-overdue recognition for the hard-working musician. The Michigan native racked up numerous blues awards in his home state before moving to Nashville in 2008. Nominated for the IBC by the Nashville Blues Society, Hill probably is best known for his role as music director for soul legend Bettye LaVette. Hill, whose gritty, soulful sound impressed the judges, was double IBC winner as he also was chosen Best Solo Guitarist in the Best Instrumentalists category.

The International Blues Challenge’s opening round kicked off on Wednesday, February 1, with more than 260 bands, representing 14 countries and 38 U.S. states, battling it out on Beale Street to be named Best Band or Solo/Duo act. The quarterfinals and semifinals shows occurred the following two days, with judges selecting the top nine finalists in each category to perform in the big Saturday showdown at the Orpheum Theatre. Besides the Challenge competition performances, the IBC also presented a variety of stellar showcases, and blues fans crowded Beale Street to see the amazing performers playing their hearts out. The Blues Foundation estimated IBC attendance figures at approximately 3,000 people per day.

The IBC, however, wasn’t just about competition. It was also about community. The five-day event opened with a free International Showcase on Tuesday, January 31. Held this year in Memphis’ historic Clayborn Temple, the concert brought together musicians and festival attendees from Europe, Asia, Australia, North and South America, along with local Memphians, to celebrate the power and joy that the blues can bring. Whether they were from Poland, Ireland or Israel, everyone spoke the common language of music. This community of the blues played out at packed IBC events up and down fabled Beale Street, which Blues Foundation’s President and CEO Barbara Newman describes at “the Mecca” for the blues.

The power of the blues might have been best epitomized by the conference’s keynote panel entitled “Blues as Healer.” Musicians Walter Trout, Patti Parks and Kenny Neal all shared personal testimonies on the positive impact that the blues have played in their lives, getting them through personal trauma, illness, family deaths, PTSD and more.  Dr. Marie Trout shared her research dealing with the healing effect that people have experienced through the blues. The panel’s moderator, journalist and Vietnam veteran Don Wilcock, said he knows music saved his life or at least his sanity when he was overseas but never thought he’d have the opportunity to drive home the power of music to so many, as he was able to at the “Blues as Healer” seminar.  He is convinced the music saves lives and he saw the audience weeping and being transformed in front of his eyes.

The role of healing is one that the Blues Foundation takes seriously. Its HART Fund, which provides medical assistance to blues musicians in need, was a strong presence at the IBC, with Health Fairs offering free mammograms; blood pressure tests; screenings for diabetes, cholesterol and other illnesses; even custom-made earplugs provided at no cost by MusicCares for qualifying musicians.

Music education holds high priority for the Blues Foundation, which collaborates with local blues societies for Blues in the Schools programs and provides Generation Blues Scholarships. The result of its youth outreach efforts was well in evidence at the IBC. The Blues Foundation produces a special Youth Showcase on Friday of the IBC, and close to 40 youth bands were sponsored by their local affiliated societies to perform. Each day, you could watch impressive young musicians, some not even old enough to drive yet, playing the blues like they were old masters.

Besides working to build blues’ future, the Blues Foundation strives to maintain the music’s rich heritage. During the IBC, the Blues Foundation bestowed its annual Keeping the Blues Alive Awards, which salute non-performers who have worked to keep blues flame glowing strong. This year’s 16 honorees, who were recognized at a luncheon on February 3, included record labels, music festivals, recording studios, clubs, radio stations, publications and individuals located all around the world.