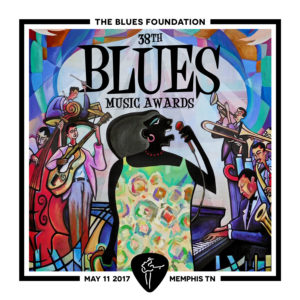 The Blues Foundation is pleased to announce the nominations for its annual Blues Music Awards, which the international organization will present on Thursday, May 11, 2017 at the Cook Convention Center in downtown Memphis, Tennessee. Universally recognized as the highest accolade afforded blues musicians, The Blues Music Awards upholds its rich cultural tradition by honoring the past year’s superior achievements in blues performance, songwriting, and recording. This annual ceremony represents the premier event for blues professionals, musicians, and fans around the globe.

Sugar Ray Norcia, individually, and collectively with his band, The Bluetones, received the most nominations with seven, including B.B. King Entertainer Award, Best Song, Best Album and Best Band. The total reaches ten with the inclusion of his Bluetones bandmates Monster Mike Welch (Instrumentalist-Guitar), Michael “Mudcat” Ward (Instrumentalist-Bass) and Anthony Geraci (Pinetop Perkins Piano Player). Chicago-based guitarist Toronzo Cannon garnered four nominations and he faces off against Norcia in both the Best Song and Best Album categories. Best Album probably ranks as the most competitive category, with Norcia and Cannon battling Bobby Rush, Kenny Neal, William Bell and the Nick Moss Band, who all have three nominations.

Several nominees will be defending their titles won at last year’s Blues Music Awards. Instrumentalist-Harmonica winner Kim Wilson is one of this year’s nominees, and Cedric Burnside might again claim the Instrumentalist-Drums crown. Shemekia Copeland and Bettye LaVette also return to the categories they won last year (Contemporary Blues Female Artist and Soul Blues Female Artist, respectively), while 2016’s Acoustic Artist winner, Doug MacLeod, is one of this year’s contenders too.

The Awards also honor the next generation of blues performers with the Best Emerging Artist Album category. In fact, two Emerging Artist nominees also are contenders for a second award. Detroit native Thornetta Davis’s “I Gotta Sang the Blues” is up for Best Song, while Terrie Odabi is competing against the likes of Bettye LaVette and Mavis Staples to be named Soul Blues Female Artist.

A ballot will soon be sent to all Blues Foundation members, as they have the privilege of deciding which nominees will actually take home a Blues Music Award in May. Anyone interested in casting a vote to decide this year’s winners may receive a ballot by joining or renewing their membership with The Blues Foundation at any time up to February 28, 2017.

The Blues Music Awards ceremony annually proves to be one of the year’s best shows. Not only does almost every nominee attend, but they also perform, creating a lineup featuring the best of the best in blues all in one evening.

Major funding is provided by ArtsMemphis and the Tennessee Arts Commission.  The 38th Blues Music Awards are also sponsored by BMI, GET and I-55 Productions, Legendary Rhythm & Blues Cruise, Memphis Convention and Visitors Bureau, the Sierra Nevada Brewing Company and Sony/Legacy.