More than 200 acts performed in Memphis January 22-26 for a chance to grab top honors at the prestigious IBC Event, which lit up Beale Street and the historic Orpheum Theatre.

MEMPHIS, Tenn. —  “Memphis, Here I Come” could stand as the rallying cry for all the performers competing in this year’s International Blues Challenge. It is actually, however, the title of the song that Ms. Hy-C & Fresh Start have on the St. Louis Blues Society’s 2018 compilation album — and the soulful blues group, led by the vivacious Ms. Hy-C (a.k.a. Jacinta Branch-Griffin) came, saw, and conquered the blues world as they wound up taking home the Best Band award at the IBC finals at the historic Orpheum Theatre on January 26.

IBC’s Best Solo/Duo winner, Jon Shain (North Carolina’s Triangle Blues Society) also has several Memphis-focused tunes on his 2018 album Getting’ Handy With the Blues, but how can you not when you do a W.C. Handy tribute record? Shain’s Piedmont-style acoustic guitar picking, and Fresh Start’s spirited juke-joint music reflect the variety, both musically and geographically, that could be found at the International Blues Challenge.

The winners and finalists all are honored with various prizes for their victories. The winning instrumentalists, not surprisingly, got instruments: a Gibson Custom Guitar and a Category 5 amp to Gabe Stillman; a special Memphis Cigar Box Guitar to Steve Strongman, and a set of Lee Oskar harmonicas (including an autographed, gold-plated limited edition Lee Oskar harmonica) and accessories to Carriere. Winners each took home a plaque, cash, and a package to include a variety of national and international club and festival gigs. In addition, Ms. Hy-C & Fresh Start, as band division winners, received time to record, mix or master at the Showplace Studios.

Next up for The Blues Foundation is its other signature event: the Blues Music Awards. Now in its 40th year, the BMA ceremony will take place at 7 p.m. on Thursday, May 9, 2019 at the Memphis Cook Convention Center. Individual tickets are $150 per person; Regular Tables for 10 are $1,500, while Premium Tables for 10 are $1,800 each. All tickets can be purchased at www.blues.org. The Blues Foundation’s block of rooms at the Sheraton Memphis Downtown also are now open for reservations; and Sheraton reservation link is up on www.blues.org.

The Blues Foundation is Memphis-based, but world-renowned, as THE organization whose mission is to preserve blues heritage, celebrate blues recording and performance, expand worldwide awareness of the blues, and ensure the future of this uniquely American art form. Founded in 1980, the Blues Foundation has 4,000 individual members with 181 affiliated blues societies representing another 50,000 fans and professionals around the world. Its signature honors and events — the Blues Music Awards, Blues Hall of Fame, International Blues Challenge, and Keeping the Blues Alive Awards — make it the international center of blues music. Its HART Fund provides the blues community with medical assistance for musicians in need, while Blues in the Schools programs and Generation Blues Scholarships expose new generations to blues music. The recent opening of the Blues Hall of Fame Museum, in Memphis, Tenn., now adds the opportunity for music lovers of all ages to interact with the music and the history. Throughout the year, the Foundation staff serves the global blues community with answers, information, and news. Support the Blues Foundation by becoming an affiliated organization, corporate, or individual member, or simply by making a charitable donation. 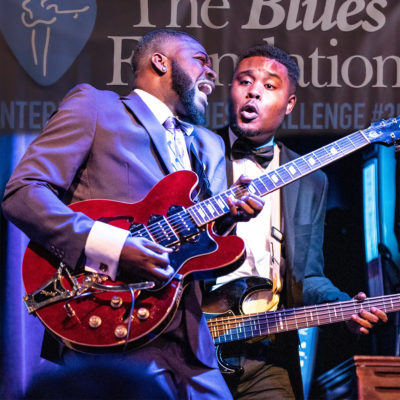